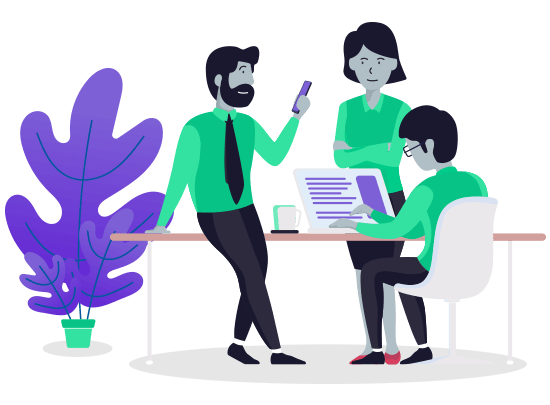 help you kill two birds with one bullet

What is React Native? If I have to say technically, react native is ‘a JavaScript library to build user interfaces’. A more reasonable way to define it as a cross-platform framework that will help you kill two birds with one bullet. React Native builds the app to a native app like how conventional apps built with Swift/Obj-C or Java are. You won’t be able to distinguish an app built with React Native from one which was built conventionally with Swift/Obj-C or Java. This is possible because you use the same native components as those which are available for iOS or Android.

The main reason for its popularity can be attributed to the fact that it stimulates the app performance of that of native apps without a need for writing two different codes. Nowadays, when numerous apps are available for similar functions, to stay on someone’s smartphone screen, an app has to be clean with intuitive User Experience, and good speed and performance of an app is imperative. Also, updating the app should be easy and seamless for keeping up with changing demands. React Native has made it possible by minimizing coding and maximizing user experience.

We at Lise Infotech, have employed React Native technology as a framework to delight our clients with a delivery that they deserve! Let us enumerate some of the reasons why ‘React Native’ is the best:-

The camaraderie of developers’ community with open-source – As we know that there is a large community of developers working on React Native, they are constantly building user experience, bug fixes, and features enhancement. So, if you are building something that is widely common among the apps, there is a high possibility that it has already been built on by a React Native member.

This I would say is a master feature of React Native. React Native automates code refreshes when code changes, instead of a need to recompile the code. Thus boosting up development agility. It also fetches real-time data for users on the application, delighting users with a seamless app experience.

Facebook invented react native because they were not satisfied with their mobile user experience. They initially created React Native for the development of the Facebook ads manager app. The result was that the animations or transition never felt buggy or unnatural.
With React Native, User Interface is smooth like a slice of butter. React Native gives a highly responsive mobile app enhancing UI with faster load time than a typical hybrid app.

What could be better for developers than being able to develop cross-platform apps by using one set of tools? That means developers do not need to code separately for iOS and Android. Just code one time, and they use 90% of the code element on the other platform. The time saved can be utilized in other prioritized tasks of the project.

React Native allows third-party plugins. It makes it much more compatible with customisation. For e.g., if you want to incorporate Google Maps on your app, you simply need to download a third-party plugin and link it to a native module. The third-party support can be fetched via API or plugin.

In a nutshell, we can say that React Native is great for cross-platform development which offers smooth User Interface, saves time for writing separate codes, has a rich library from the community of coders, offers a vast range of third party plugins, reloads updates automatically, and improves agility and experience of the whole app development process. Looking at such features, it is not difficult to guess why companies like Bloomberg, Walmart, Airbnb, Pinterest, Uber, Tesla and many more have employed React Native.

If you want to develop your application with React Native, then Lise Infotech is an ideal destination for you. We have a highly experienced and qualified team of developers working on the React Native framework. Drop an e-mail at [email protected]